In the lexicon of the Old English language one can more or less exactly stress several certain historical groups separated from each other by their origin. Old English was a language of migrants - Saxons, Angles and Jutes first lived in northern Germany, contacting with certain surrounding, and later moved to the British Isles where they established links with completely different people. Moreover, the language was quite dynamic - Old English is much more progressive and energetic than for example Slavic or Baltic languages, in inventing new forms and lexical units, or modifying the old ones.

According to our classification, the Old English lexicon can be divided into three groups:

1. Loanwords in Old English, which were really numerous and included words and expressions from Latin, Greek, Slavic, Baltic, Celtic and some unknown languages of ancient Europe. They all compose the group of substratum (aboriginal language) or adstratum (neighbouring languages) lexicon.

The study of loanwords in Old English should begin with the period preceding the landing of Anglo-Saxons in Britain. Already when these tribes lived in Saxony and on the Jutland peninsula they acquired a lot of words from different tongues which later were brought to Britain. So loanwords are not only those which appeared after leaving the continent, but also those which were taken in Germany before sailing to Britain. However, these both groups of words should be separated accurately from Common Germanic loanwords which happened to appear in the language of Germans when they lived together, before the Common Germanic language split into several branches.

a) One of the latest groups of loanwords from Latin and Greek is called "scientific" lexicon - words denoting science and technology which came from Rome or from France in the 9-11th centuries. The earlier set of words borrowed from the Latin language include the so-called "popular" lexicon which was brought to Britain by Roman settlers and warriors beginning even from Caesar's expeditions to Gaul and Britain in the 1st century BC. Still, the majority of Latin words penetrated into Old English since the 5th century when ties between Germanic kingdoms and Rome became very dense. Anglo-Saxons partly acquired Latin terms on the continent from Roman traders and missionaries, partly took them from Latinized population of British towns. The majority of such words belongs to the Popular Latin language - spoken by ordinary people, but never written by the nobles. Examples of them include:

At all about 400 words were borrowed from Latin (an from Greek via Latin) into different Germanic languages, and most of them exists in Old English. As we can see, they are mainly terms of culture. After the Christianity was introduced in Britain, the huge number of church terms also appeares in the language:
de'ofol 'a devil' from Greek diabolos;
engel 'an angel' from Latin angelus;
cyrice 'a church' from Greek kuriakon 'god's house'
bisceop 'a bishop' from Greek episkopos via Popular Latin ebiscopus; 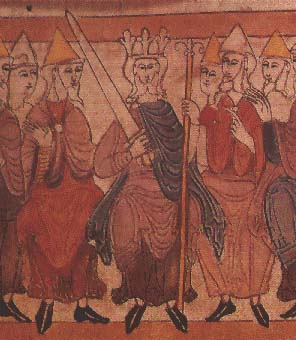 b) There is a number of words in Germanic tongues borrowed from Slavic languages in the first millennium AD. Practically all of them were acquired at the time when Germanic and Slavic nations contacted in the Baltic area. Later borrowings penetrated into Old English through Scandinavian, after Vikings conquered England in the 11th century, and through Goths and who had long-term ties with Slavic merchants. I doubt Anglo-Saxons were acquainted with Slavic people directly. The very question of contacts between Germans and Slavs in the prehistoric period is rather complicated, no historical evidence exists, and moreover, Slavic languages are very similar to Baltic ones, and one can hardly discover if this or that word used to be Slavic or Baltic originally.

Slavic words in Old English and other Germanic languages are the following:
fealdan, fold 'cloth' from Slavic *poltno 'cloth' (Gothic plat 'a piece of cloth')
syrc, sierc, serc, syrce 'a shirt' from Slavic *sorki- 'a shirt' (Old Norse serkr < *sarkir)
seolc, siolc 'silk' from Slavic *s'elku from Asian tongues (Mongolian sirkek)
niththas 'warriors, husbands, men' from Slavic *netii 'relatives' - but this is believed to have been a Common Germanic borrowing.

Another interesting Slavic word is Old Swedish torgh, Danish torv 'a marketplace' from the Slavic word *torgu 'a market'. All Scandinavian languages borrowed this word from Slavic, but later Slavic languages themselves lost it, replacing by a word borrowed back from Germanic: Russian rynok 'a market' is derived from Germanic ring 'a place, a square'.

c) The Celtic collection in the Old English lexicon is much more important, Anglo-Saxons came to an island populated by Celtic tribes. Nevertheless, Celtic people practically did not mix with the newcomers, but left their homeland and went to the west and north - to Wales, and to Scotland. That is why the number of words borrowed from Brythonic Celtic languages is not so large in Old English, and consists mainly of different specific terms or geographical names:

Such words denoting things which were not common for Germanic people include dry' 'a druid' from Celtic drui'; bratt 'a coat', cumb 'a valley', etc. One of them is the usual English word down, Old English du'n from Celtic *dunum 'a hill'.

However, there is a great number of words which existed already in the Proto-Germanic language. Germanic and Celtic peoples then lived very close to each other in Europe and could not but loan many lexical items from each other's languages. Nowadays it is sometimes hard to discover where some words are borrowings from Celtic or they are original Germanic words just cognate to Celtic ones. One of the most well known words is the Old English word ri'ce 'a kingdom', Gothic reiki, Old Icelandic ri'ki, Old High German rihhi 'powerful'. The word itself is rather widespread in Indo-European languages (see Word-A-Week issue for *reg'-), the phonological analysis shows it is still a borrowing: the Proto-IE root *reg'- would have given the Germanic *e' (Gothic e', Old English e', ae', Old High German a'), but it gave i which is itsself typical for Celtic. Gaulish ri'x is very often met in personal names of leaders and kings, and could be borrowed by Germans when Celts were on the upper level of social development - in the epoch of La-Tene.

Another Celtic root is the Old English i'sern, i'ren 'iron' (Old High German i'sarn, Gothic eisarn) from Gaulish isarno- (see Gaulish Dictionary) 'iron' - Irish iarann. According to archaeological data, Germanic tribes entered the Iron Age near the middle of the 1st millennium BC, when Celts already used iron in their weaponry and tools. So it is natural to suppose that Germans acquitred both the metal and the word from Celts about 2500 years ago. That was the time when they lived close to each other and communicated widely.

The very word dunum which denoted a fortified Celtic hill, could be taken by Germans even earlier, in the Germanic word *tu'n (Old English tu'n 'a fortified place', Old Saxon tu'n 'a fence'), from which Modern English town comes.

Moreover, there is no need to remind that a great lot of place names and river names in England keep their Celtic roots like the Avon river (cf. Irish abhainn 'a river'), Inverness, or the Usk river (Irish uisce 'water').

d) Finally, there are words in Old English the origin of which is for sure not Germanic and evidently not even Indo-European. This small group of words was borrowed from unknown languages, and a deep research is still needed to discover their true origins. Besides a rather long list of words which is known as the substratum lexicon in Germanic, which we will examine one day, there are Old English words which have more solid theories of origin:

arut 'ore', Old Saxon arut, Old High German arut, aruzzi,, Old Swedish artogh 'a copper coin' Old Norwegian ortog can derive from Sumerian urud 'copper' or from some other ancient language of the Middle East.
siolufr 'silver', Gothic silbur, Old Icelandic silfr, Old High German silbar is maybe a borrowing from some Eastern source as well (cf. Russian serebro and Lithuanian sidabras - you can ind this word in no more IE branches)
paeth 'a path, a way', Old High German pfad 'a road' could originate from Scythian or some other Iranian tongue (Avestan path 'a way')
plo'h, plo'g 'a plough', Old Icelandic plo'gr, Old High German pfluog and its relative Russian plug, borrowed from Germanic, are all from the Rhaetian language, a non-IE tongue spoken in the Alps. Plinius once mentioned the Rhaetian word plo'vum 'a wheeled plough'. This borrowed word is rather late, but first it appears in Old High German, which is the closest to the Alps, then in Old English (in the 11th century).

2. After examining all borrowed words in Old English, let us speak a little bit about original Germanic words in the language, which certainly made the majority - unlike in the Modern English language where words like kangaroo and suburbanization are far more numerous than real English words.

Old English as a Western Germanic tongue preserved all characteristic features of the Western branch of the group. The majority of its words and word combinations have cognates in other languages of the subgroup: Old High German and Old Low German first of all, and their dialects - Frankish, Allemain, Bavarian (all High German), Old Frisian, Old Saxon (all Low German). Moreover, originally the language of Angles, Saxons and Jutes were simply varieties of the Old Low German language, with all its peculiarities in phonetics and morphology. Nowadays the languages closest to English are Scots, Frisian and Dutch, all Low German.

Different Germanic words, preserved by the Old English language, are spread in a different way in other Germanic tongues. A lot of them exist in all known languages of the group and that is why can be called confidently Common Germanic. But there is a large number of lexical items which are never met in other language except Western Germanic ones. For example, Old English mo'dor 'a mother', is found in Old High German muoter, Old Saxon mo'dar, but is never seen in Gothic, though this very word is widespread in the whole family (see Word-A-Week for it). The same with the word wi'f 'a wife', Old High German wi'b, Old Saxon wi'f, but never in Gothic. The Old English word cae'ge 'a key' is absent in all languages but Frisian kai, kei. And as for ba't 'a boat', Old Icelandic beit - all Western Germanic speech lacks it.

In many cases the absence of this or that word in a Germanic tongue is just a matter of incident - materials are scarce for many of ancient languages of Europe. Gothic and Old Low German texts do not cover all spheres of the languages, and many words could be missing in them, though they actually existed. However, many words are not found in Gothic because they did not exist ever.

Common Germanic words include first of all those which were used in everyday life and were common both in poetry and in texts:

But really sometimes words which are very frequent in any language are not spread in each of the Germanic tongues:

Naturally, it is hard to believe that if Gothic really used words cognate to Old English bi'om and macian, they were not shown in Gothic texts. The same thing can be said about Scandinavian (North Germanic ) tongues which are studied much better than Gothic.